Only just got around to posting about the NX1 v1.31 firmware update and along comes Samsung with a another release. Barely had time to finish my lunch (which was delicious by the way), fry up some mushrooms gently, sprinkle some onion powder, smoked paprika and black pepper, smash some eggs into it near the end, take it out, use the hot pan to fry up some tomatoes (with the smallest drip of oil). Heat up some pitta bread, stuff them, eat them, roll your eyes at the tastiness.

Anyway, after updating the NX1 I went back into i-Launcher which prompted me to update, so I did. It now looks like this. 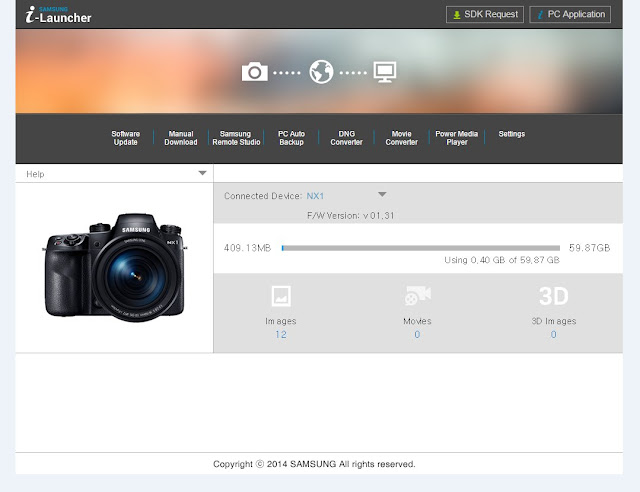 Apart from the redecoration, can you spot any differences?

Samsung Remote Studio is now available, along with the SDK Request link at the top of the page. I haven't tried the SDK request, I don't have time at the moment, I'm sure others will be on it like a car bonnet in due course. Direct link to download the Remote Studio software is available HERE. 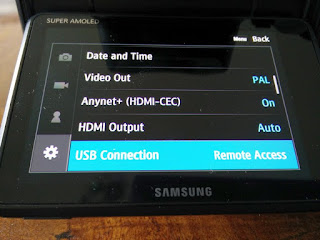 Installing the Remote Studio was a breeze, just follow the instructions. Accessing it with your NX1 will require two things, the first it warns you about (camera must be updated to v1.31) the second one may trip some of you up.

The camera has to be set to Remote Access (not Mass Storage). You can see the setting in the accompanying image under USB Connection. After that you fire up the Remote Studio App and get stuck in!

First thing you'll notice is that it replicates all of the main settings available in the camera. I've only played with it briefly but everything seems smooth. I'm sure it'll improve further with later versions. I wonder if it will be updated as regularly as the NX1 has been... The answer to that is yes. 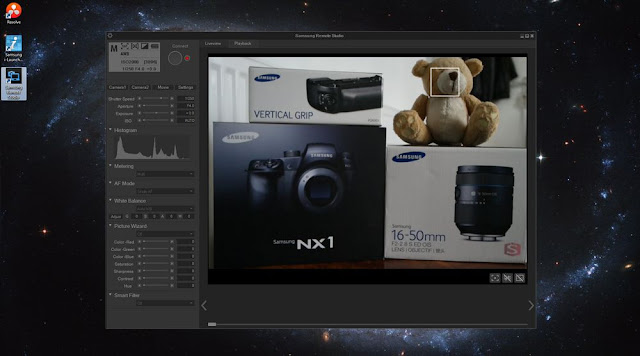 Options to change AF mode, shutter speed, movie frame rate, resolution etc, it's all there. Options for the on-screen guide lines, crop marks, AF indicator box, colour profiles, Histogram, all pretty comprehensive. I noticed that hovering over the Connect Button can activate the AF, when you take shots, the captured frames appear in the lower panel (under the Liveview screen) along with a folder link that you can click on which will open the appropriate location in Windows Explorer if you want direct access.

Anyway, not much more to add, best thing to do is install it yourself and have a play, I can see this being extremely useful for studio shoots and the like.

One bugbear. Not sure if it's just me, but I went to open the Help file (link the top left of the app) which is supposed to load a PDF, looks like the PDF is corrupted. Couldn't open it in Chrome, Opera, Google Drive or manually. A shame really because I'm interested in the System Requirements, minimum RAM usage, processor and so on. Update has corrected this. I can see this app being extra useful with Windows 8 based notebooks, tablets and other relatively powerful mobile devices. Can add an entirely new level of usability to on-location shoots (photo and filming). Lots of potential here!

If you have any questions, fire away in the comments and I'll try to answer them promptly. All in all, it's been a good day in Samsung NX1 software land.

P.S. It transfers RAW files without a hitch ;-)